After my gallbladder was removed in 2011, one of the things that accompanied the IBS was constant nausea. I mean that literally, I experience constant nausea, it's never stopped. I had to learn the difference between feeling constant nausea and being able to tell when I was actually going to throw up (upchuck). The only way to tell is when my salivary glands actually start overproducing, that's when I'm going to upchuck.

Unfortunately, when it comes time for my stomach to purge itself, it's a violent act. There is so much force that the blood vessels around my eyes burst. I have pulled and strained muscles in my neck and my torso. If I'm on my hands and knees, which I like to do so gravity helps, my knees end up with bruises on them.

My setup first started with a footstool (It's under the blanket in the picture), I have my chest resting on that. I soon discovered I needed some sort of cushion between my body and the stool to avoid bruises. It didn't take long to clue in that if I had something under my knees, they wouldn't bruise. Now my setup consists of a pillow for under my knees, a blanket to cushion me from the stool, a box of kleenex, and a glass of water (the glass of water is missing from the picture).

I was super grateful for this setup two weeks ago. I had the most violent stomach purge I have ever experienced. I call it "My Exorcist moment". It was so violent that I burst blood vessels all over my face and a little on my chest despite the fact the blanket was there as padding. I strained muscles in my torso and my tongue even felt like it was almost strained. Thankfully, the pillow kept my knees from bruising.

Do you have a little setup for when your stomach plots against you and an uprising happens? (You better believe I was going to be inserting humor with this tale) 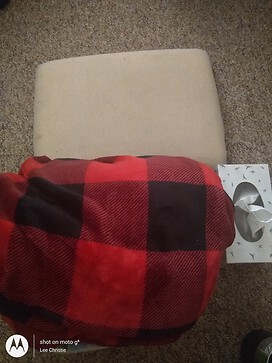 Eating Out Safely With IBS

Why Are My IBS Symptoms Worse In The Morning?

5 comments
This article represents the opinions, thoughts, and experiences of the author; none of this content has been paid for by any advertiser. The IrritableBowelSyndrome.net team does not recommend or endorse any products or treatments discussed herein. Learn more about how we maintain editorial integrity here.

Please read our rules before commenting.

Have you taken our In America Survey yet?