Why a Low FODMAP Diet Might Not Work For IBS

A low FODMAP diet is a go-to diet for the treatment of irritable bowel syndrome or IBS. It involves reducing foods with high amounts of fermentable oligosaccharides, disaccharides, monosaccharides, and polyols which can make IBS symptoms worse.

Studies have shown that a low-FODMAP diet can offer symptom relief for 70 percent of people with IBS, showing improvements in pain, diarrhea and bloating.1

What happens when you are in the 30 percent of people with IBS that the low FODMAP diet doesn’t work?

During the 2-6 weeks on a low FODMAP diet, you will know if the low FODMAP diet has helped you. While you’re going through the diet it’s important to rate your symptoms before, during, and after the diet.

It’s also important to understand that outside factors can influence symptoms such as, stress levels or anxiety, other illnesses, hormone fluctuations in women especially around the time of menstruation and other factors.

If you’re not sensitive to FODMAPs, you should not experience any exacerbation of symptoms upon their reintroduction.

Before ruling out FODMAPs, it’s important to assess whether you were 100 percent compliant. The best way to ensure compliance and be sure you’re following the diet correctly is to work with a qualified nutritionist or dietitian.

If you were compliant, then it’s time to rule out other conditions that have similar symptoms such as celiac disease, inflammatory bowel disease, and endometriosis. Once these are ruled out then other scenarios can be explored:

Small Intestine Bacterial Overgrowth (SIBO) has been found to be a contributing factor in those with IBS.

SIBO occurs where bacteria that should mainly be located in the large intestine are found in the small intestine. The fermentation from bacteria results in the same symptoms as IBS such as bloating, pain and altered bowel movements.

SIBO is usually diagnosed through a hydrogen breath test. If the test is confirmed as positive, then you may be prescribed antibiotics or herbal antimicrobials to clear the overgrowth. This treatment is combined with a diet. This might include the FODMAP diet, but your health practitioner may also remove other forms of carbohydrates such as starch, resistant starch, sugar, soluble fiber, and prebiotics. It is best to work with a health practitioner if you suspect SIBO.

Is it a food chemical?

Food chemicals such as histamine, salicylates, glutamates, amines, and certain food additives can cause food reactions.

Diagnosing an intolerance to a food chemical such as salicylate intolerance is done using a low chemical elimination diet. Food chemicals can be reintroduced systematically and quantities tested to see which foods are safe and to determine your threshold, or how much you can eat of a certain food without triggering your symptoms.

Is it a yeast overgrowth?

The most well-known form of yeast overgrowth is candida. Symptoms may include constipation, diarrhea, nausea, flatulence, and bloating – but there is also a range of other symptoms such as fatigue, oral thrush, recurring genital, or urinary tract infections.

In my opinion, one way to treat candida overgrowth is to eliminate sugar and certain supplements such as garlic, probiotics, and pomegranate may also help. It is best to work with a qualified health practitioner if you suspect Candida.

What else could it be?

There can be a range of possible food triggers. The foods that commonly cause problems for people include cow’s dairy, eggs, gluten, coffee, corn, alcohol, and soy.

Additionally, your health practitioner may want to test your liver function, test for parasites, or an overgrowth of certain bacteria species.

Has the low-FODMAP diet worked for you? Tell us your story: 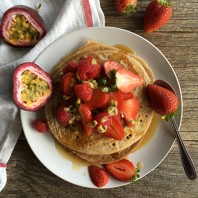 What to Eat When You Think You Can’t Eat Anything: The ABCs of Low FODMAP foods

15 comments
This article represents the opinions, thoughts, and experiences of the author; none of this content has been paid for by any advertiser. The IrritableBowelSyndrome.net team does not recommend or endorse any products or treatments discussed herein. Learn more about how we maintain editorial integrity here.

Do you cancel plans often due to IBS?